We provide a lot of local video programming and other information for the community. We provide media production equipment & training to residents of all ages, We run in school & after school programs. We partner with local non prfotis, schools, Town offices, & community groups to produce programs of all sorts. If you value the services we provide, we ask that you consider making a financial contribution to support our efforts.

Our main source of funding comes from cable TV "franchise fees", as regulated by the Federal Communications Commission (FCC). In short, the franchise fees were imposed on cable companies during a time when cable TV was rapidly expanding throughout Towns & Cities nationwide. The franchise fees were a way of making the companies give back to local communities for using public rights-of-way (stringing cable lines and erecting poles). This paved the way for local ("PEG") access television stations , which, in the U.S., is specifically tied to cable TV, as are the "franchise fees" that fund us.

Over time, technology has evolved but the language has not. "Cable TV" is not what it used to be when the rules were written. We have advocated for a long time that te rules should be updated to better reflect the world in which we live and which the service providers are operating. We also have realized that it is crucial to develop other streams of revenue to support our operations, and not to over-rely on the cable franchise fees. This is accomplished through such things as memberships, business underwriting, fee-for-service, & fundraisers. It is increasingly important for us to develop each of these areas. These have been in the work for some time, and we continue to look for ways to develop them.

But now, there is a more ominous & urgent threat to the franchise fee funding model. The FCC has proposed some new rule changes that could strip away our core funding stream. These recent developments have underscored the need to seek support, in addition to what we are already doing.

How You Can Help: 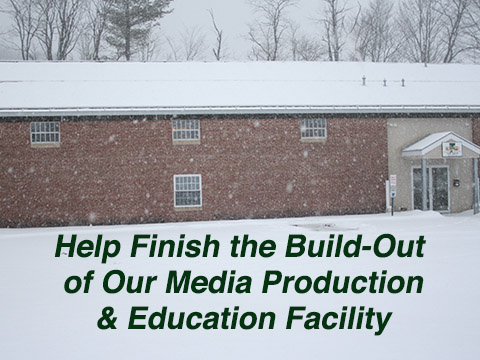 We have some exciting things happening around the station, including finishing our 3rd & final phase of the build-out of our TV & media education facility in the Ludlow Community Center complex. The total budget for that project is $145,000. We are pleased to report that are half-way to our fundraising goal, thanks to grants from the State of VT Buildings & General Services, Marro Trust, & The Cricket Foundation. Every dollar counts and would go towards completing this project once & for all!