Keeping Up with Senior Solutions

Our viewing platforms have been updated. We have new channel numbers on Comcast, we are in HD on VTel, and now our program schedules can be found on the program guide for both Comast & Vtel. And, of course, as always you can tune in to our video on demand here on our website or on our You Tube channel. 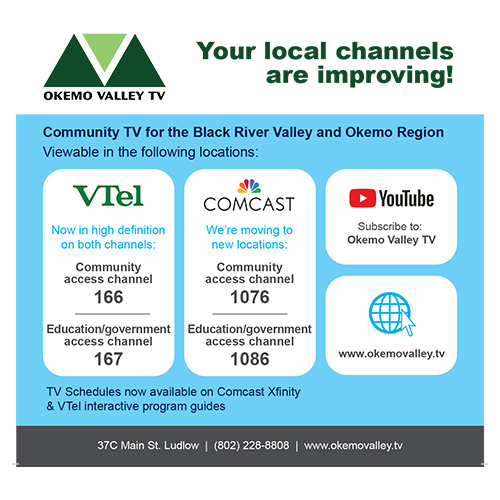 Tune into our community calendar / bulletin board for important information. This runs on our TV channels in between programming and can always also be found on the Calendar page here on the website. Due to rapidly-changing news & information related to COVID-19, including various closures, cancelations, etc., we are displaying it here on the homepage for the time being.
Do you have news or info. you would like to share? You can send it to us on the Calendar page ! We will get it up promptly.


Watch the latest "Spotlight" (recorded via video conference), to learn about the Town of Ludlow's Emergency Management plan:

In an effort to help cope with social distancing and self-isolation, Dr. Linda Thomson, a licensed hypnotherapist, has offered this half hour session for you to enjoy:

Update: May 8, 2020
For the past 8 weeks, we have been working remotely, and have adapted to making TV in different ways (mostly through teleconferencing). From Chamber of Commerce workshops with the SBA to local economic updates, daily updates from Senate President Tim Ashe, regular press briefings from the Governor, story time readings from the Cavendish Library, local government meetings over Zoom, daily distance learning science classes from Fairbanks Museum, & much more, we are feverishly bringing programming to local TV (and our website & You Tube channels). This would not all be possible without a strong network of colleagues in community media throughout Vermont. Through our collaborative work, we are able to bring you a continuous stream of timely local and regional news, information, educational programming, as well as entertainment. We invite everyone in the community to put us to use. We accept media of all kinds - including cell phone videos, audio recordings, Zoom meetings, and on & on. Get in touch! As the Governor begins to loosen restrictions after May 15th, we will soon be back working in the station at a regular basis. Of course, special precautions will be made as we get back to some sense of normalcy.

Update: March 25, 2020
Following the Governor's "Stay Home" executive order on March 24th, our facility will remain closed for the time being. We are getting creative about how we can continue to provide valuable media resources and information to the local community. We are doing this by using teleconferencing to record video and share information, as well as through our community calendar / TV bulletin board . We invite anyone with information to share or requests to submit it to us by email or by calling Patrick at (802) 356-6027. As an update to the information we shared on March 13th (below), we will not be using the studio to record or hosting gathering of any kind inside our facility for the time being, effective immediately.We will continue to post updates here related to our operation during these unprecedented times.

In response to the outbreak of the COVID-19 Coronavirus, we are taking several precautions, which means temporarily modifying our operations. The goal is to protect the health of our staff, volunteers, and the community members around us,  while also providing any services that we are still able to provide, in order to serve the community as a valuable media resource.

Want to get in touch? Send Patrick an email.

Again, we will be televising & posting  videos related to COVID-19 as we receive them. Check "New Videos" on the left sidebar of this website, and the "Videos" page;

Click here to get results by Town. We will upload all of the results as we receive them for the Towns that we serve.

To watch any of the informational Town Meetings (for Andover, Ludlow, Cavendish, Plymouth, or Mount Holly), simply go to our Videos page.

Ralph Pace moderates a discussion among 3 of the candidates who are running for Ludlow Selectboard: Justin Hykek, Jay Jurkoic, & Bruce Schmidt. Jurkoic & Schmidt are the 2 candidates running for the single 3-yr. seat. Hyjek is running for one of two 1-yr. seats. (Scott Baitz & Chris Garvey are the other candidates for those seats, but they were unable to participate in this forum). With Town Meeting Day right around the corner, we've been busy recording shows to help inform voters. Here is an interview longtime community producer Ralph Pace held with Ludlow Municipal Manager Scott Murphy, on the Town budget and other ballot items:

All programs can be viewed on our TV channels as well, through the days leading up to Town Meeting (Tues., March 3rd). Be sure to check our schedules page for info. - these shows will primarily be playing on our education / gov. channel, but will also have some timeslots on the community channel. 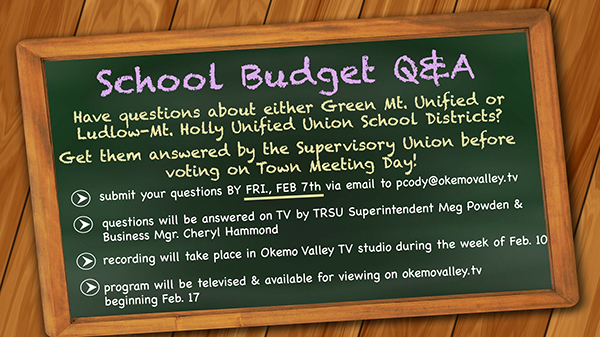 Email us your questions on the proposed budget for either local school district in the Two Rivers Supervisory Union (GMUSD or LMUUSD) by Friday, Feb. 7th!  Meg Powden & Cheryl Hammond from Two Rivers Supervisory Union will then answer them on TV. The program will be televised on our local Education & Government channel (check here for info. & schedules) beginning Feb. 17th.

This is all to help provide important information leading up the school district budget votes on Town Meeting Day (Tuesday, March 3rd).

Thank you to our most prolific community producer, John Specker, for taking a break from fiddle playing, to volunteer to do some cleaning. He did a great job and we appreciate it - he does strong work with both the mop and the vaccuum!

A renowned musician, John has recorded many, many music songs in our studio over the years. We like having him around.

Check out what's happening at the Cavendish Fletcher Community Library in January, with Kata Welch! 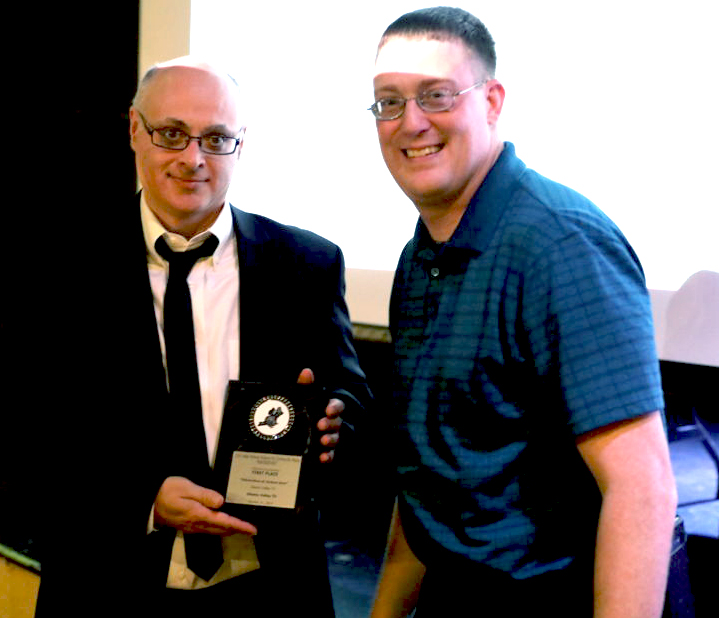 "Paleoindians at Jackson Gore", the short (20-minute) documentary that we produced in collaboration with the State of Vermont Archaeologist and the University of Vermont Consulting Archaeology Program, received a 1st place "Nor'easter" award for Historical Documentary. The Nor'easters are annual awards from the Northeast region of the Alliance for Community Media, the national advocacy and membership organization that represents community access TV stations. Our Production Coordinator, Eric Chatterjee (who spent many hours editing the film), was in attendance to receive the Nor'easter award at the ceremony held in Portland, ME on Oct. 31st (in photo on left, with festival organizer Jim Palmer).

While the paleoindian excavation at Jackson Gore studied humans who traveled through the area 12,000+ years ago, the documentary was the digital equivalent of an archaeological project in its own right.  It began in 2007, with recording some footage during the excavation of the Jackson Gore site, which was being developed by Okemo Mountain Resort, as part of its expansion. The footage sat on the shelf until the Fall of 2018, when we received a call from State Archaeologist Jess Robinson. That led to us recording follow-up interviews with the head of the UVM program and him, so we could hear about what was discovered & learned from the dig. The 2007 footage was resurrected, and piece-by-piece we combined the old & the new into a narrative, with the help of numerous staff, volunteers, & community members. This project is exemplary of the kind of collaboration on which we thrive, with numerous local, regional, & State partners. We are honored to receive this recognition; we oversaw the whole process, and were intimately involved with the various pieces, but this 1st place recognition is for all involved. Thank you to our partners in this project: the State of VT Division of Historic Preservation, UVM Consulting Archaeology Program, Okemo Mountain Resort, Ralph Cameron / Sky Shots LLC, Cavendish Historical Society / Margo Caulfield, Mount Holly Community Historical Museum / Dennis Devereux, Sydney Miele, & Emma Vastola. Watch the award-wining "Paleoindians at Jackson Gore" here:

Community access TV stations across the country are facing a serious threat to their primary funding source, cable TV “franchise fees”, following a federal rule change. Last month, the FCC (Federal Communications Commission) voted to approve a rule change in the way the fees are calculated. The “franchise fees” are charged to cable companies in exchange for their use of public lands and rights-of-way. In Vermont, they are earmarked specifically for community access TV, formally known as “Public, Educational, & Government (PEG) Access” (as defined by the 1984 Cable Act, and still the law of the land). The new rule change is expected to result in a significant loss in franchise fee revenue for the community stations not just in Vermont, but nationwide.

Locally, Okemo Valley TV cut its operating budget by 10% this year (starting July 1), in anticipation of the rule change, which was long-expected to pass. This comes on top of an unexpected 7% loss of franchise fee revenue the station began to experience last year, as a result of a change in the way that the area’s (and nation’s) largest cable provider, Comcast, accounts for the franchise fees.

To address the losses in revenue, the station is scaling back on its open hours by 7 hours per week. Beginning September 16th, the stations new hours of operations will be 10-5 on Mondays, Wednesdays, & Fridays, and 10-7 on Tuesdays & Thursdays. Okemo Valley TV’s Patrick Cody says they “have known for some time that we need to diversify our funding in a sustainable, meaningful way, and we’ve been working towards that. We also have to accept the impact of these latest hits and address them head-on”. He estimates that this reduction will account for most of this year’s budget cut.

The FCC rule change, on top of the other threats to franchise fee funding, is forcing organizations such as Okemo Valley TV to take action on its own and seek out solutions moving forward. The extent to which the FCC rule change will affect the bottom line of each organization is still a little hazy, but Kevin Christopher, President of Vermont Access Network (the statewide membership & advocacy organization), offers, “we’re preparing for dramatic shifts in funding and operations.” The Vermont Access Network has helped to create the PEG Access Study Committee to help bring attention to the funding issues and to help find solutions. In an acknowledgement of the valuable role community access TV plays in Vermont, the committee was formed by the legislature during the past session and charged with the task of identifying viable new funding sources to help the long-term viability of community / PEG access TV.

“Now, more than ever, we need support from volunteers so that we can continue to put out the amazing diversity of community programming”, said Okemo Valley TV Board President Francis DeVine. The station welcomes community members to create programming of their own, providing equipment and offering training to those interested. Its two cable channels are found on Comcast 8 & 10, in Ludlow, Plymouth, & Cavendish, and Comcast 20 & 21 in Mount Holly. On VTel, Okemo Valley TV is on channels 166 and 167 system-wide. Program schedules and local programming can also be found online at okemovalley.tv.  For more information or to get involved, call 228-8808 or visit the station’s website.