We Hear You- Ski PSA

A small group of local residents are inviting fellow citizens into our studio to read the Constitution. This project will result in a compilation of readings- each person will read a section- which will then be televised and streamed online. Copies of the Constitution are available - thanks to Representative Peter Welch’s office- here at the station.

To arrange a time to record, please contact us here at the station by calling 228-8808 or emailing Patrick. People of all ages are encouraged to participate. The station is handicapped accessible.

We will will handle all of the technical aspects of the production, including cameras, sound light, graphics and a teleprompter, which will be set up for readers' convenience.

One of our bright spots over the past year, which has no doubt come with its challenges, is John Specker. He's a local sensation who shares his musical gifts in our studio on the regular. Whether he's playing the fiddle or in this case, the banjo, he delivers with his brand of traditional American folk songs. Here he is with "The Old Bunch of Keys". And, no, that's not a fashion statement- during the pandemic he's been playing masked... leading by example as always. Thanks to you John Specker, for bringing us some light!

This year, watch the magic of First Night North from the comfort of your own home! Starting at 4pm on New Year's Eve on our Community Access channel (Comcast 1076 & VTel 166), we will be televising the virtual presentation of First Night North, thanks to our colleagues at Kingdom Access Television in St. Johnsbury. Presented ion partnership with Catamount Arts, this 8+ hour extravaganza is filled with a mix of performances by musicians, storytellers, puppeteers, comics, dancers, & a magician - entertainment for all ages! For a complete schedule, visit the Catamount Arts website.

This snowfall was epic & historic. Local amounts totaled over 40 inches in under 24 hours! Yes, of course, it snows here. But we haven't seen anything like THIS in decades. Check out Pat Moore's video montage from the storm .
Do you have some of your own amazing footage or photos from the Dec 16-17th storm? We want to see them! We'd love to be able to use them on our community calendar or in other ways (here on the website, or in TV programs, for example). Proper photo credits will be given.  Send us an email , and we will coordinate with you!

Here is a photo submission from Kathy Ehlers, featuring Bailey the dog. Thanks Kathy!

It's the season of darkness, as we head towards the Solstice. And during this year in particular, which has been dark in other ways, it's been nice to see some light here & there. Kudos to the Town of Ludlow & the Rec. Department for the display out in front of the Community Center (where we operate). The illuminated tank and other holiday decor is bringing some joy as we come & go.

There's no way around it; it's been a tough year. But in the darkness, there have been moments of light. And now we want to piece them together into a collection. We want to hear from you!  We'll kick it off by sharing one of our moments of light: the adaptability and resiliency shown by some of our members. One of the most obvious examples is Kata Welch, the Cavendish librarian. With the library shut down, then operating with restrictions, then closed again, Kata has been super resilient. She has taken her Story Time readings to the virtual world, recording a steady stream of them throughout the year, which we televise and put here on our website (and You Tube channel )


We are re-posting Kata's most recent, holiday-inspired Story Times below. Thank you Kata, for sharing the light with us!


What are your moments of light? We want to hear about them. We are launching a new project, to put together a collection of reflections from community members, sharing this year's "moments of light".
Send us an email or call the station at 228-8808. Come on & share the light! Let's do this!

How the Grinch Stole Christmas

The Ninth Night of Hanukkah

The Green Mountain Union High School boys' soccer team had a great playoff run to cap off an unusual season during this unusual year. And now you can watch both the semi-final and final games on Okemo Valley TV.  With special thanks to our volunteer crew of Elliot Thompson, Philip Malazarte, & Sara Stowell, we were able to provide a live stream (on our You Tube channel) of the Div. 3 semi-final game, at home, earlier this month. That game can be found here.

The State Final was a few days later, played at Hartford High School. The VT Principal's Association, in partnership with NFHS Network, provided coverage of that game & we have it.

Over the upcoming holiday weekend, we are playing both games, back-to-back on our Community Access Channel. Tune in Saturday, Nov. 28th, starting at 1pm and 7pm, and Sunday Nov. 29th at 7pm. 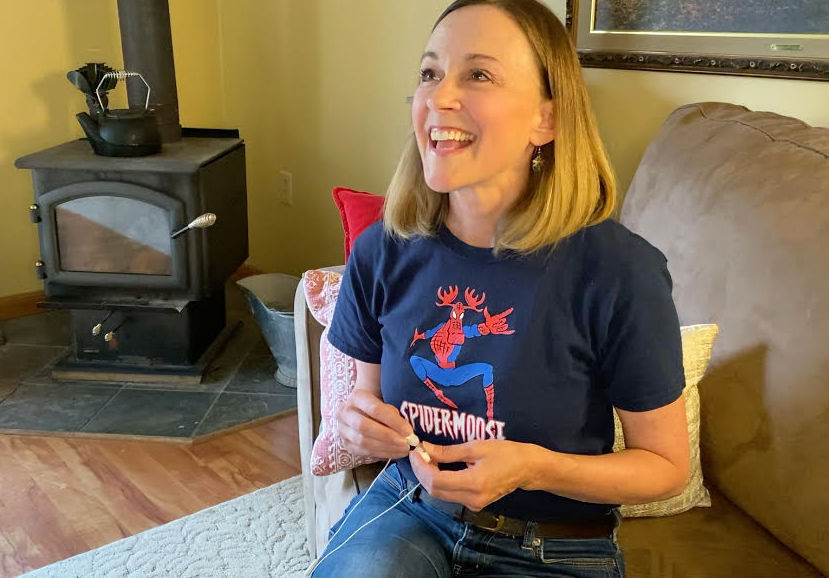 “Make Yourself at Home” is the next virtual concert produced by Susan Haefner and Little Yellow House Studio.  The event will premiere online on  our YouTube Channel and on TV on our Community Access channel on Sunday, November 1 at 5pm. It will feature Susan and her longtime friend & musical collaborator, Lisa Brigantino, as well as special guests. The concert will include well-known folk and old-time tunes as well as Lisa’s original songs.

Susan & Lisa will be available for chatting during hte You Tube premiere. While there is no cost,  donations are gratefully accepted during the premiere. Contributions will directly support the work of Little Yellow House Studio Artists and Black River Independent School, the chosen charity for this event.

We are thrilled to have Susan & Lisa back for another virtual concert. You can still watch their last one here on our website, which was sponsored by Friends of Ludlow Auditorium this past May. In addition to all of the singing, Susan handled the audio and video production as well, earning her our 2020 "Outstanding Achievement" award.

Nearly a year ago, a large group of more than 40 community members came together in the studio to read the United States Constitution. Looking back, that feels like it was during a whole different era, one in which larger gatherings were OK, before the COVID-19 pandemic rocked our world and physical distancing became the norm. Spearheaded by Cavendish resident and former Okemo Valley TV Board member Wendy Regier, the concept went like this: each person reads a short section on camera, and then the station’s staff would edit it together as one cohesive piece, called “The People Speak”. When the editing was completed, a screening would be held in the studio for all who participated, and then it would be released to the world.

“It seemed an oral reading (of the Constitution) might generate a more careful look at what is truly written as well as thoughtful discussions of what it means to live in a democratic republic, for the people and by the people," said Regier.

Well, it's become clear that an in-person screening is not going to happen anytime soon. But in the interest of getting it “out there” for people to see, Okemo Valley TV will instead premiere “The People Speak” on our community access TV channel (Comcast 1076 & VTel 166) and You Tube channel on Tuesday, October 27th at 7PM, one week prior to Election Day. It will continue to televise periodically through November and will also be available for viewing here on the website.

This special program nicely augments all of our election-oriented programming, at a time when people are really thinking about voting and democracy. Our Education & Government channel (Comcast 1086 & VTel 167) is ripe with programs featuring local and statewide candidates, including candidate statements being recorded in Okemo Valley TV’s studio, as well as candidate forums and debates for statewide office. All of the election programs are also available to watch here on the website (you can view the entire collection of election programming here).

Okemo Valley TV has been helping to provide a platform to candidates for local legislative offices while informing voters at a time when, due to the pandemic, such opportunities are otherwise lacking.  Now through Election Day, local candidates for local House seats and the Windsor County Senate District are being featured on the Okemo Valley TV. As of this writing, several candidates have recorded their statements in the Okemo Valley TV studio, as well as on location in the field.
All candidates running for Windsor County Senate seats and House seats within the station’s service area encouraged to record a statement of their own. Appointments may be made by calling 228-8808 or emailing Executive Director Patrick Cody at pcody@okemovalley.tv. Okemo Valley TV is a regional community television station, primarily covering the Towns of Ludlow, Mount Holly, Plymouth, Cavendish, Andover, & Reading.

In addition to the local candidate statements, Okemo Valley TV has also been able to televise interviews and forums with candidates for statewide office, thanks to its colleagues at other community access TV stations in the State.

Tune into election coverage programming one of the following ways:

Thanks to the Okemo Valley Chamber of Commerce & the team at Okemo Valley Magazine for the featuring us in the latest edition, which is out now!


And the photo on Page 6 of our new Board President Noah Schmidt is from the one & only Russ Hurlburt Photography. There's so much talent around here.