Sammy B- Be Great at What You Do

If you live in the area around Okemo mountain (Ludlow / Plymouth / Cavendish / Mount Holly / Andover / Reading), we are YOUR independent, non profit, non-commercial, and hyper-local media resource. By becoming a member, your support helps keep the engine going.

We've been having a lot of fun working with the after school programs in Ludlow & Mount Holly. Here is the latest creation from Mount Holly:

The Plymouth Historical Society's hard work on the production of "Irene- Ruin to Renewal" has been recognized by the northeastern chapter of the Alliance for Community Media (ACM-NE). At the ACM-NE's annual video festival and awards show in Falmouth, MA, "Irene- Ruin to Renewal" received 2nd place in the Documentary category. Betsy Tonkin, who performed the role of Executive Producer of the project, and who was the President of the historical society at the time, was presented with the award, along with our Executive Director, Patrick Cody.

We teamed up with the historical society to help produce the documentary, which encompassed more than 2 years of work. The project was spearheaded by Tonkin, who, along with a small team of volunteers from Town, spent hundreds of hours, collecting images and video footage, scheduling and recording interviews as well as the soundtrack (on which several local musicians play), and overseeing the editing process. They relied on us at Okemo Valley TV for technical support, and to supply the necessary facilities and equipment. The feature documentary, which chronicles the impact that Tropical Storm Irene had on the Town, premiered in August 2016 to approximately 400 people over a single weekend at President Calvin Coolidge State Historic Site on Plymouth Notch. The screening events marked the 5th anniversary of the storm.

Betsy says: "The Alliance for Community Media award will hopefully create broader opportunities for Plymouth's story of reconnection and renewal to be shared both locally and regionally.  This would not have been possible without the partnership between the Plymouth Historical Society and Okemo Valley TV in producing the professional historical documentary. Perhaps the award will inspire others to utilize community media to reach out to larger audiences."

There are a number of ways for community members and organizations to get involved with us, to create media projects of their own, however big or small. Let us know how we can help!

We were awarded a 2018 “Building Communities” grant for $25,000, from the State of Vermont.  Administered through the Department of Buildings and General Services, these funds will help complete the third and final phase of renovations in Okemo Valley TV’s facility. The annual Building Communities grants are awarded to “help preserve important historic buildings and enhance community facilities”; the program is funded by the State legislature. A grant award ceremony was held last week at the State House; shown in the photo below (from left to right) are: State Rep. Annmarie Christensen (Cavendish-Weathersfield), Patrick Cody, Gov. Phil Scott, State Senator Alison Clarkson (Windsor Co.), and State Rep. Dennis Devereux (Ludlow-Mt. Holly-Shrewsbury).

Several years ago, we embarked on a project to renovate the former Ludlow Armory "tank barn", which is now part of the Ludlow Community Center complex. Thanks to the support of the Town of Ludlow, who selected us as a long-term tenant of that building, along with Black River Good Neighbor Services, we could establish a new home. That meant building an actual studio, along with the other supporting spaces, that would make the facility an accommodating and efficient work environment for community members to use, for the purposes of creating media.  The first 2 phases included the initial fit-up, studio & performance space. Given the scope of the project and our limited budget, it was necessary to break it out into more manageable pieces. We are now gearing up for the final phase. The remaining work involves enclosing the remaining rooms, which include a classroom (to function as a digital media lab), as well as editing suites, a lobby, and control room.  The project, estimated to cost $145,000, will also add needed energy efficiency improvements. With the addition of the grant, $60,000 has now been raised towards the final phase of the build-out. Due to the requirements of the "Building Communities" grant, we will need to begin a portion of the work by March 2019. We will start with the "Digital Learning Lab" (conference room / classroom) and the studio production control room. These 2 rooms will allow us to more effectively teach TV studio production to students and other groups while also allowing us to expand our media education services beyond TV production, with the new "Digital Learning Lab". We will be able to host and offer classes on such topics as podcasting & computer animation. Fundraising for the project will continue until the entire goal of $145,000 is met.

Black River High School Junior Paige Kelley (left) is doing a work-study with us this semester. She is seen her recording voice-overs for a new series of video thanking our business underwriters. In addition, she has been taking photographs, editing videos, and creating bulletin board announcements for community organizations. Last year, her experience in Mr. Bannon's Media Studies class piqued her interest in video produciton & editing. That led her to us, and she has jumped right in. She's doing great!

We also have a student from River Valley Technical Center starting with us as a "co-op".

We offer training & workshops in media production to people of all ages. Want to make videos? Have your own show? How about a podcast? The sky's the limit! The first step is to sign up for an orientation.

During the last school year, CTES 6th graders did a class project on ghost stories in Cavendish. They explored buildings and houses throughout Town that are said to have been haunted. The students interviewed current occupants of the buildings and then recorded those stories in our studio.

And From the Archives...

Back in 2005, just before Halloween, local author Joe Citro gave a talk about local haunted tales at the Fletcher Memorial Library. Michelle Stinson, the youth librarian at the time, caught up with him before that talk, out on Depot St. in Ludlow, in front of a house that reportedly had ghostly activities. (Incidentally, Michelle went on to work for us for 8 years. This was the start of it all). 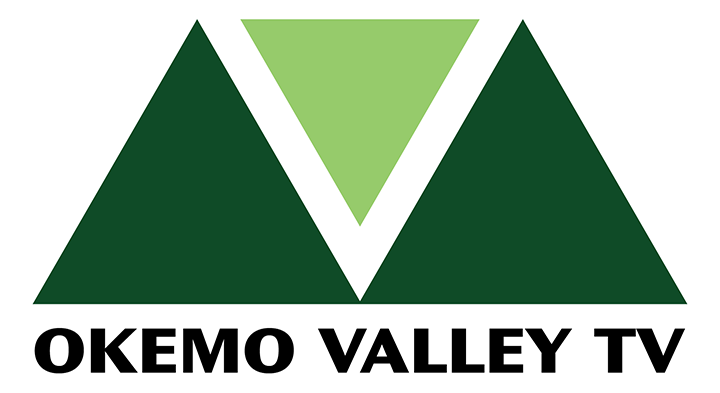 After 16 years of operating as LPCTV, we have changed our name to Okemo Valley TV. While we now have this new identity, everything else remains the same. The name change is the result of our current strategic plan, which identified the need to build a stronger identity & brand, as well as broaden our potential reach. Basically, this means we needed a more identifiable / recognizable name that was inclusive of the region. We wanted the community to be involved with the process as much as possible, so we began by putting out a survey. We asked community members about the name and what the liked or didn't like about different names. The most favorable response we received was "Okemo Valley TV", so the Board considered that name, and formally adopted it as our new name in May of this year.  We announced the new name at our annual meeting in June, but held off making it official until we had everything lined up. And so, the second step was to create a new logo; we decided to have a logo design contest, which just recently concluded. The new logo has been finalized, which came from an entry submitted by River Valley Technical Center student Cameron Purington.

So, welcome to the new-look Okemo Valley TV!

After receiving 42 entries from 17 different people in the recent logo design contest for Okemo Valley TV, we are pleased to announce Cameron Purington as the winner. Cameron is in the Technology Essentials class at River Valley Technical Center. The class, taught by Ms. Kristen Wilson, participated in our contest as a class project. The class visited our facility this past week, where they were given a tour and heard from Okemo Valley TV Board member Jon Clinch, who helped judge the contest and offered some insight on design and typography. Since 2001, we have been known as "LPCTV", but our name has changed and now, thanks to Cameron, Ms. Wilson, and the RVTC class, we have a logo! "By identifying a need to re-brand LPCTV, we wanted to involve the community much as possible", said Executive Director Patrick Cody. Community members were polled earlier in the year to help choose a name and then, over the past few months, the logo contest was held. "By getting the community involved, not only to participate in our regular operations, but also to shape who we are and where we're going, that's what it's all about."

Fundraising for the 3rd and final phase of of construction on our facility is well underway. We are pleased to announce that we have received 2 grants totaling $30,000 to help towards this effort. We have received a $5000 award from The Cricket Foundation and, just this past week, we learned that we have been awarded a $25,000 Building Communities grant from the VT Division of Buildings & General Services. This brings our fundraising total up to $65,000, towards the goal of $175,000. The final phase includes the build-out of private edit suites, a sound booth, a digital learning classroom, control rooms, and a kitchenette.