Story Time- The Chicken of The Family

Cavendish Library Story Time- I Don't Want To Be A Frog 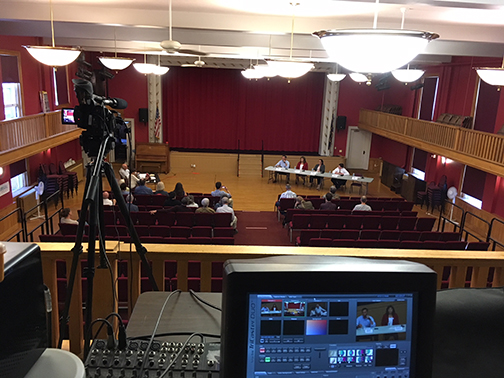 Paige worked with us as a “work-study” student this past September - January, during her junior year at Black River. She served as a liaison between the Ludlow schools and us, soliciting news & information from them to post on our bulletin board, producing videos, and coordinating other productions. Her independent work included productions for the Elementary School, including the "Let's Grow Kids" event  and with the after school program on a fun little kid dance video. We are looking forward to working with her again during her senior year.

Former Board member and Okemo Valley TV volunteer Sharon Combes-Farr is our 2018 Community Service award recipient. After serving for 5 years on our Board of Directors, Sharon has moved out of Town, to Westmoreland, NH. We wish her well in her newly-adopted community.

Sharon spent 2 as our Board President, 2 as V.P., and helped to lead our marketing & fundraising efforts for most of her tenure.  In particular, she helped to turn our annual fundraiser, the Derby Gala, into a dependable and organized event that consistently raises $4-5K per year for us. She also helped to form a Marketing Committee, steering us in a position where we market and promote ourselves more effectively. She was a proven and effective leader on the Board. We wanted to thank her with this token of appreciation, for helping to strengthen her hometown TV station.

The 2018 "Producer of the Year" award went to Kelly Kingsbury, on behalf of Ludlow Baptist Church. Our station has had a long-lasting relationship with the church, dating back 13 years. Kelly's father, Fenwick Kingsbury, began recording Sunday services for the church, using our camera and sound equipment, in 2005. In the beginning, the "labor of love" was a multi-step process that involved Fenwick being a regular fixture in our former one-room facility in the Ludlow Elementary School Building. He would pick up the equipment each Friday, returning it on Monday mornings, when he would he would "capture" the videotape onto the editing system (in real time...things were a little different then). He would come back once or twice throughout the week to finish the edit, so we could have it ready to televise over the weekend.
(Photo on left: Kelly receives award on behalf of Ludlow Baptist Church, from Executive Director Patrick Cody).

Fenwick passed away in 2011, but his legacy and the tradition have carried on. For several years now, Fenwick's daughter, Kelly, has recorded the weekly services, and has shared in the editing duties with Roger Croswell, who delivers the finished product to us each week. All of this is handled electronically, off site.  While the church now owns its own equipment  and technology has helped, this process has continued, week in & week out over the years. Ludlow Baptist Church services have been a mainstay of our programming this whole time - we can set our clocks to it. We thank Kelly and Roger for keeping it going, and remember Fenwick for the foundation he built.

(Fenwick Kingsbury, editing in our old facility in the Elementary School, circa 2005).

The 2018 Okemo Valley TV Outstanding Achievement Award has been given to Marji Graf, who for the past 10 years led the Okemo Valley Regional Chamber of Commerce. Since Marji was moving and starting her new job in Maryland before our Awards Ceremony & Open House, Executive Director Patrick Cody presented her with the award at the June 20th Chamber mixer, which served as her going away party (thanks to Doanld Dill, we'll soon be televising some video coverage of that event). During her time with the Chamber, Marji produced her monthly series, "Okemo Valley- Your Place in Vermont" with us. She started the show in 2008 and kept it going up until this month, when she recorded her final show. Marji serves as an excellent example of how community TV can be used as a promotional tool. Through the production her show, she made regular use of our services to promote Chamber activities and the business community throughout the region. We were a tool for her, which she put to good and effective use, and in turn, we received a steady stream of current programming. We wish Marji Well! 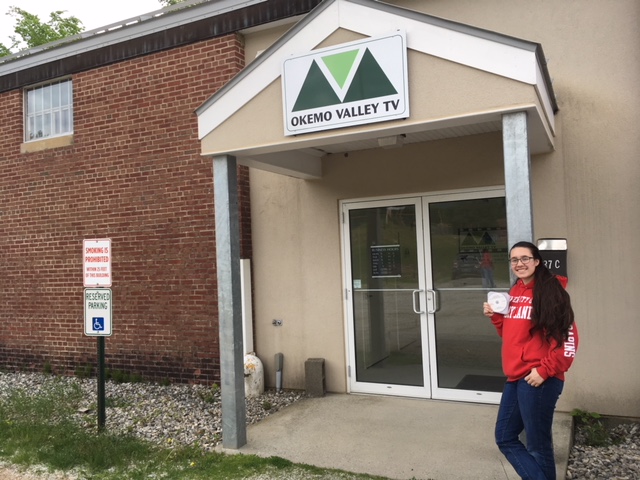 Once again, Black River H.S. student Natasha Fortin is competing in the National History Day documentary competition. National History Day is taking place this week, just outside of Washington, D.C. at the University of Maryland. Pictured here is Natasha with DVD copies of her documentary, just before leaving for the 10-hour road trip. She gained this honor after finishing in first place at the Vermont History Day competition in April. This year, Natasha's project is a short documentary on Nichelle Nichols' ground-breaking role in Star Trek. The production, including the scripting, voice-over narration, and editing, was all done at Okemo Valley TV. Natasha (and formerly, her sister Aiyana, a 2017 Black River graduate), has been producing documentaries for History Day with us for many years. Black River High School has a long history of participation in and success with the VT and National History Day programs. And we have a special relationship with Black River & History Day. Here's a little of our own history for you: we were originally founded in 2001 after long-time B.R. history teacher, Sue Pollender, was looking for a venue in the local community equipped to help students with the video documentary portion of History Day. She learned that Ludlow could have its own community access TV station, and voila! Every year since, we have worked with Black River students on their History Day documentaries. But that's a story for another time...

For now, this about Natasha and Black River. We wish them well at this year's History Day. Congratulations is also in order to Black River history teacher Ms. Suzette Cyr for continuing on and developing such success among her students. You can read more about Black River students' History Day activities this year here. You can watch Natasha's 1st place “Frontier of Change: Nichelle Nichols’ Conflict and Compromise Regarding her Role in Star Trek" here.

On Wednesday, June 27th, we will be holding an open house & annual meeting, in celebration of our 17th year. The event will start at 6PM, with a brief awards ceremony, where we will present our annual awards to community producers, volunteers, & Okemo Valley TV members, in recognition of their work during the past year. There are 4 awards: the "Community Service" and "Outstanding Achievement" awards, as well as the "Producer of the Year" and "Youth Producer" awards. The annual meeting will immediately follow the ceremony, and will include the Board of Director election, a re-cap of our own work during the past year, and a presentation & vote on the budget for the coming year. All are invited; appetizers and refreshments will be served. manager

okemovalley.tv (subject: Open%20House%20%26%20Annual%20Meeting) (Please RSVP in advance by sending us an email.)

View the agenda for the Open House & Annual Meeting here.

10 years ago, our old friend Pat Valente, recorded this Memorial Day reflection in our old studio. Over the years, he recorded many such videos on his long-running series "Update from Pat Valente". I thought today would be a good time to bring this particular one back. Pat was a regular fixture in that old studio. I miss having him around.

We'd like to thank the 50+ people who came out to the 7th Annual Derby Day Gala to celebrate Spring, take in the Derby, and support community TV on May 5th.  Over $5000 was raised for the "Building Our Media Future" campaign, which is the 3rd and final phase of the build-out of the media production and education facility in the Ludlow Community Center complex. We moved into the space in 2013, making improvements and building out the studio ever since. We are now more than half-way to the goal, thanks to proceeds from the Gala, as well as a $25,000  "Building Communities" grant from the State of Vermont and a $5000 grant from The Cricket Foundation, received earlier this year.

And thanks also to John & Ida Mae Specker, who provided the music.

The NAB (National Association of Broadcasters) holds the largest annual trade show and expo for the media & entertainment industries. It happens in Las Vegas every April. I attended this year, in part to connect with Ann Marie Cumming, who is the V.P. of Communications for NAB, and who happens to be from the area (she grew up in Bellows Falls- her mother, Jean Morrill, was on our Board of Directors for several years). I was also at the NAB Show to do some research on developing technologies and the latest equipment. There was A LOT to see and to digest. As part of my work on behalf of the Vermont Access Network, a collection of community TV stations throughout the State, I did some research on two really hot media technologies: OTT (over-the-top) and live streaming.

Here's a video I made of my NAB Show experience:

Check out my blogs on each:

Oh, and not only did I get to catch up with Ann Marie at the show, but I also connected with Phil Newman (in photo below), who was there working as a freelance cameraman for Adobe! Phil grew up in Ludlow, graduated from Black River, attended Okemo Mountain School, and did some work for us, too! He was one of our first and most active volunteers, and also sat on our Board of Directors. He is now a cinematographer and camera operator based in LA.