Harry the Hypnopotamus Goes to Help the Children of Ukraine


Here are direct links:
On Apple TV
On Roku


This is in addition to all of the other ways to view programming... 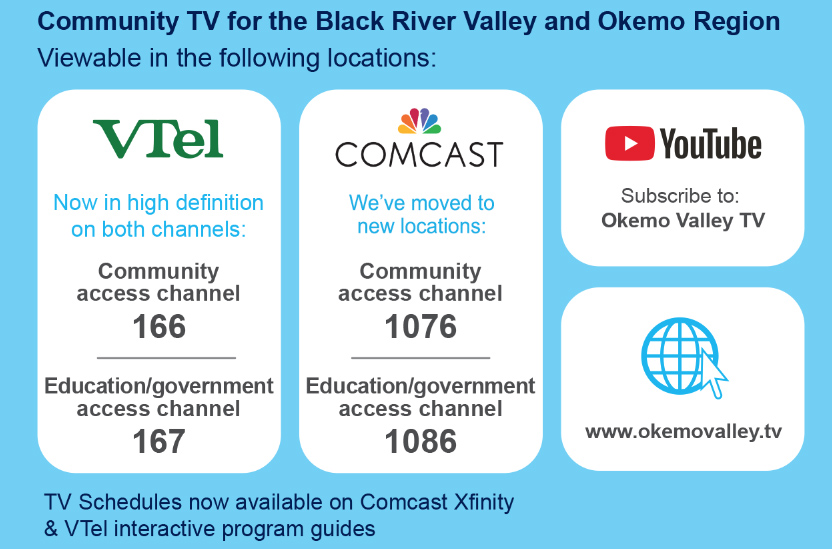 We are looking for someone to build a streaming server.  This would be a great "side hustle" for someone with the expertise. We need it to be set up to streaming one of our cable TV channels 24/7 via OBS software. We have 2 TV channels, and we're already streaming the other channel on its own server. The new one just needs to have similar specs and do the same job.
We also have a need for some other PC hardware work to be completed, which might be an additional task for the same person.
Send us an email if you are interested! (screenshot of Community Channel being streamed via OBS)

On Friday September 17th our office will be closed for the day. We will resume our regular business hours on M\onday, September 20.

On Friday September 17th our office will be closed for the day. We will resume our regular business hours on M\onday, September 20.

We have lost our trusted co-worker, friend, and longtime Programming Coordinator, Fred Marin, who passed away recently. Fred was a friend to many in the area and was involved with numerous organizations, volunteering his time to help others. He worked for the station for the past seven years, and prior to that, he was a member of our Board of Directors for five years. He are grateful for his years of service and privileged to have know him. He was a dedicated man of wisdom and honor.

Want to know where all of that local programming comes from? Nearly all of it is created, produced, and delivered by community members. Each year, we recognize our most prolific producers and best original programming with 4 awards, for: Producer of the Year, Best Youth Programming, Outstanding Achievement, and Community Service. Shown below, this year's awards go to (pictured below, in order from top to bottom):

Our Annual Meeting is Wednesday, June 23rd starting at 6pm. It will be held outside our building int he Ludlow Community Center Compelx, up on the adjacent soccer / baseball field.

Community members are invited to attend - please RSVP by sending us an email or call the station at 228-8808 ahead of time.

Light refreshments will be provided. The meeting will feature our community prroducer awards & the election for the Board of Directors. The agenda is available here.

To vote in the Board of Directors election:

As of last year, all ballots and the voting process is electronic & through an online platform. Paper ballots can be picked up at the station or mailed by request. If anyone wishes to have a paper ballot mailed, please make a request by calling the station or by sending us an email. Paper copies will also be made available at the Annual Meeting on the 23rd.